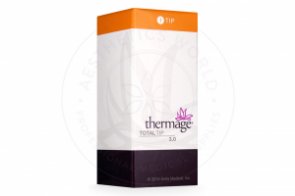 Thermage CPT is a skin contouring and rejuvenating device that is designed by Solta Medical, an American biotechnological company that specializes in manufacturing energy-based medical devices. This Thermage device is used to generate non-ablative and continuous monopolar radiofrequency (RF) heat energy that is effective at repairing existing lax collagen fibers and stimulating the growth of healthier collagen fibers in skin treated with this device. These effects definitely help to smoothen and sculpt skin and reduce the appearance of premature skin aging signs, such as wrinkles, inelasticity, loss of contours, and cellulite. Unlike other skin contouring therapies, Thermage CPT is, as its name implies, is incorporated with original Comfort Pulse Technology (CPT), an energy algorithm that mimics the mechanism used in Transcutaneous Electrical Nerve Stimulation (TENS) therapy. This Thermage device monitors the temperature of the surface of the skin that it is treating and releases bursts of a cooling sensation to soothe the skin and to disrupt the normal neural pathway, both of which result in subdued pain during the treatment procedure. An additional feature of Thermage CPT is its ability to vibrate. The vibrating sensations greatly reduce discomfort caused by heat energy. Thermage 3.0cm² Total Tip 900 REP and 1200 REP are two of the sterile and disposable membrane tips that are meant to be attached to the Handpiece of Thermage CPT in order to distribute heat energy and its cooling effects (and vibrations if enabled) to a treatment site on the neck, face, or body. This membrane tip has a computer chip that is pre-programmed to ensure that the tip only delivers 900 or 1200 pulses of heat energy to the skin; after these pulses are delivered, this Thermage Treatment Tip must be thrown away. Thermage devices, including Thermage CPT, and its accessories, including Thermage 3.0cm² Total Tip, are certified by the US Food and Drug Administration (FDA).